An article from the Lincoln Journal Star, written by Cindy Lange-Kubick.

“It was completely the determination of these people to make it there and their flexibility that made it happen. We did not know for sure if we could go until three weeks out.”

They have ventured forth in the new world — out across the oceans — and they can report that it is wonderful. Magical, even.

Everywhere they went during their pandemic-delayed trip to Italy in June, the small group from Lincoln were met with joy.

“Literally, they would greet us with tears,” said Jane Griffin, who organized the tour with her Italian-born husband, Francesco Ciotti. “It was that genuine joy of, ‘We’re back doing what we love to do and seeing the people we love to see.’”

The trip had been scheduled for May 2020. But its organizers knew months earlier that it wouldn’t happen. Italy was hit hard by COVID-19 during the first wave of the pandemic, and the United States soon followed.

Griffin and Ciotti have taken small groups to Italy for the past 10 years.

The couple met there in 1985, when Griffin was a college junior studying art history abroad and met Ciotti, a friend of her host family. They eloped seven years later in the United States, but continued to travel back and forth to Tuscany.

Ciotti began teaching Italian here and, eventually, his Lincoln students started asking: Would you ever consider taking us to Italy? The answer was easy. Si.

And after they returned, some of them asked: Where will you take us now? And so ‘Italiano For You’ was born. And the couple began exploring more of Italy, intimate tours of eight to 12, scheduling trips in the spring and fall.

The trip planned for May 2020 was a special one. The MoMo trip. 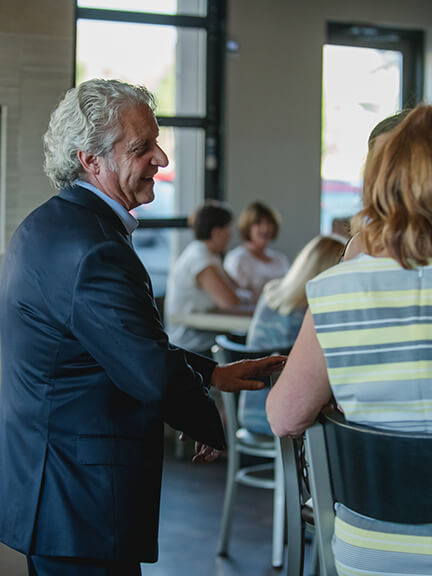 MoMo Pizzeria and Ristorante © 2019
Website design and development by Firespring